Interview with the Bedford BULLETIN August, 2012

Check out this wonderful article Tom Wilmouth, editor of the Bedford BULLETIN wrote about our interview:

Years ago when Susan Coryell lived in Northern Virginia, she started writing a novel about a haunted Revolutionary War era estate nearby.

But then she moved to Smith Mountain Lake. Her address changed, but her desire to write didn’t. Coryell decided to continue working on her novel, "A Red, Red Rose," but move the setting to a lake. "I did the bulk of my research (for the book) at the Bedford Museum," she said. "It was just fascinating doing the research." Later this fall, on Oct. 23, Coryell is scheduled to talk about her book and the history she researched at the Bedford Central Library. Coryell calls her novel "a cozy mystery" as well as a Southern gothic novel. That means it is high on mystery and low on gore. She said the characters are ones "the reader might encounter in daily life anywhere and they are set in small, picturesque towns or villages." And the Southern gothic allows for a number of the region’s cultural issues to be explored. That’s certainly true of "A Red, Red Rose," which includes cultural clashes between Northern and Southern values, city and country living, wealth and attitudes about the Civil War, family ties and bloodlines, revenge and retribution as well as history and nature. "Characters have their flaws," she notes. The protagonist in the novel is 20-year-old Ashby Overton from New Jersey, who visits her aunt and uncle at their historic estate in Southern Virginia. She hopes to unearth her ancestral roots and the cause of a mysterious rift surrounding the horseback riding death of her grandmother many years ago. From the moment she enters her room in the oldest wing of Overhome, Ashby feels an invisible, enfolding presence. This was Rosabelle’s room, but no one is willing to talk about Rosabelle. As summer unfolds, so does the shroud of silence surrounding Overhome. Ever present is a force Ashby never sees, only feels. Thus the entrance of the paranormal: candles light themselves, notes from an old lullaby fall from the ceiling, the radio tunes itself each day. And roses, always meant for Ashby appear in the unlikeliest places. Notes Coryell: "Full of heartbreak and adventure, fear and passion, the summer leads Ashby on a suspenseful sometimes terrifying journey as she navigates centuries of family strife alongside the puzzling parameters of the spirit world. Ultimately she discovers that some secrets, even the most fiercely guarded, are destined to be revealed." Coryell has been working on her book for more than a decade. She said it appeals to a wide audience because of its 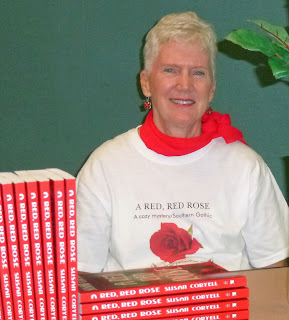 range of themes and characters. This is her first time to have a work available on E-book, which Coryell said is exploding. She said it’s been receiving positive reviews and has also drawn an audience from paranormal groups. "There is a lot of theme in this book," she said. "I like to keep people turning pages." Coryell said the history in her book is authentic. She said she’s never encountered a ghost but has friends who have. Some groups have said her version of a ghost have fit perfectly what their experiences have been. She is planning a sequel, based on Ashby’s life some three or four years later. She said it will "solve" one of the long-standing Confederate mysteries. Writing is nothing new to Coryell—a retired English teacher—or her family. "I always say writers know who we are and writers have to write," stated Coryell. Her maternal grandfather was a published poet; her brothers are both published nonfiction authors; all three of her children are writers and a couple of her grandchildren are also following in those footsteps. "My mother said I was born with a pencil in my hand," Coryell said. Her first published book was "Eaglebait," which took on the issue of bullying. Though published two decades ago, it has received renewed interest. "Eaglebait" won two awards—a national and an international one—and is cited on numerous anti-bullying Web sites. That prompted Coryell to bring it back out in softcover last year. "I do think that is an issue that isn’t going to die," she said of bullying. And Coryell is setting her writing standards higher, the more she writes. "I want to make my writing even better," she said. When not writing, Coryell enjoys boating, kayaking, travel, golf and yoga. Coryell notes that her book is a good choice for book clubs because of all the themes and layers. "My novel is not just a who-done-it thriller but a book based on multiple themes," she said, adding she would be happy to meet with book clubs that read and discuss the book. "A Red, Red Rose" is published by L&L Dreamspell: www.lldreamspell.com. It is available as a Kindle E-book at Amazon; AllRomance/omniLit; multi format Ebook from Fictionwise; iBookstore!; and Nook E-Book (Barnes and Noble) for $4.99. Print copies are available from Amazon and at Barnes and Noble bookstores for $13.99. Visit her Web site: www.susancoryellauthor.com and her blog: www.susancoryellauthor.blogspot.com. She is on Facebook and utilizes Jacket Flap, Linked In and She Writes.
Posted by Susan Coryell at 2:15 PM